5 Reasons Montreal Is the Perfect City for Students !!


This is Montreal, the largest city in Canada’s province of Quebec and one of the most distinctive travel destinations in North America. With excellent options for higher education, it’s also the perfect city for a college student. Here are five reasons why.

1. An identity of diversity
Montreal is one of the most diverse cities on the continent, with one in every four residents of the Greater Montreal area being an immigrant. Quebec is a French-speaking province, but 55% of the population is bilingual in French and English, so you’ll get around just fine if English is your only language.
Two of the city’s top universities use English as the primary language of instruction. McGill University is ranked as one of the top universities in the world and has produced 12 Nobel Laureates, and Concordia University—the largest university in Canada by enrolment—boasts the prestigious John Molson School of Business.
And if you do want to learn French, there are ample opportunities to do so. Quebec’s Ministry of Immigration offers free courses both in-person and online.

2. No car? No problem
Even if you aren’t able to bring your car to Montreal, the city has ample ways to get around. Montreal has 400 miles of bike paths, making it a relatively easy city to navigate on two wheels, which helps international students a lot. There’s also a robust public transportation system with a four-line subway system and bus routes that crisscross virtually every part of the island.

3. World-class learning institutions
With 11 universities, 60 colleges (private and public) and 7 school boards, Greater Montréal offers a wide array of disciplines to study in, whether at the university, college or vocational level. The universities in the city enjoy an excellent reputation with more than 200,000 students, including over 35,000 international students. What’s more, with the largest pool of university researchers, the Greater Montréal research hub is one of the most highly funded in Canada.

4. An affordable city
With a population of over 4 million, Greater Montréal stands out for its low cost of living. In fact, housing is twice as affordable as many big cities in North America and Europe. The cost of housing is therefore quite favourable for students who decide to come study in Montréal.

5. A promising job market
Greater Montréal has experienced the best job growth among the 20 largest urban areas in Canada and the U.S. (+3.6%) in 2017[2]. Moreover, it ranks first in the Americas for foreign investment [3]. With its favourable job market, international students with a study permit can gain experience in leading-edge industries such as aerospace, visual effects, video games, big data, virtual reality, life sciences and health technologies, or even fintech.

#Congratulations Shubhdeep For Australia Visa, Apply for Your Study Visa With #Kangarooz 09780336000 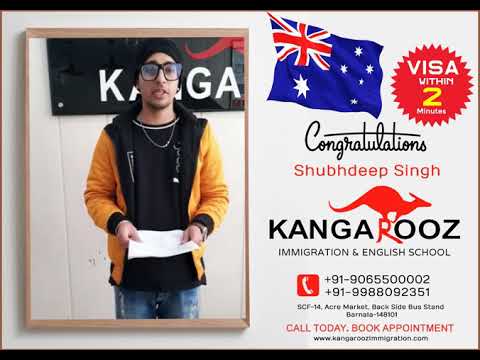 Kangarooz Immigration and English School
Kangarooz Overseas Education and Immigration Consultancies, one of the pioneers in providing assistance to students who pursue their education abroad, has quite a fascinating story behind its inception. The year was 2008. Stephen Harper, President of the Canada had just visited India to forge trade relations between the world’s two largest democracies. This moment served as the backdrop to the founding of Kangarooz. India had always supplied the western world with the best resources, ranging from spices to gold.